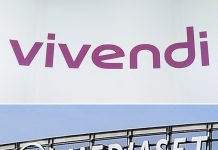 PARIS: French media conglomerate Vivendi and Italian rival Mediaset have agreed to bury the hatchet in their long-running legal battle over failed plans to set up Europe’s answer to US streaming giant Netflix, the two groups said. The feud had pitted two European heavyweights against each other: Mediaset is controlled by the family of Italy’s flamboyant former prime minister Silvio Berlusconi and their financial holding Fininvest while Vivendi’s billionaire chief is France’s top corporate raider Vincent Bollore.

“Vivendi, Fininvest and Mediaset are pleased to announce that they have come to a global agreement to put an end to their disputes by waiving all litigation and claims between them,” the companies said in a joint statement late Monday. Under the terms of their proposed partnership, Vivendi, the parent company of French TV channel Canal+, was to have bought all of Mediaset’s Premium pay-TV channel.

But Vivendi claimed it had been misled about the true value of Mediaset Premium and ripped up the deal, and instead snapped up a 28.8-percent stake in Mediaset in a move both the Italian government and the Berlusconi family deemed as hostile. As a result, Mediaset and Fininvest sued Vivendi for 3.0 billion euros in damages and interest in June 2017.

Vivendi’s acquisition also ran into trouble with the Italian telecoms regulator which said the French group had breached media ownership rules and ordered it to reduce its stake. However, last September, the European Court of Justice said the Italian regulator’s ruling ran contrary to EU law and that the complex limits to the market share any company can control did not ensure plurality in the media.

Then in April this year, a court in Milan ordered Vivendi to pay Mediaset 1.7 billion euros in damages and interest. As part of their newfound truce, Vivendi said it had “committed to sell on the stock market, over a five-year period, (its) entire 19.19-percent Mediaset equity stake held” via an independent subsidiary called Simon Fiduciaria.

Vivendi will also drop its resistance to Mediaset’s plans to move its headquarters to the Netherlands, where it wanted to pool its Italian and Spanish activities and its 15.1-percent stake in Germany’s ProSiebenSAT1 group into a Dutch legal entity called MFE (Media For Europe). In addition, Vivendi and Mediaset said they have entered a good neighbor agreement in free-to-air television and standstill commitments for a five-year term. – AFP