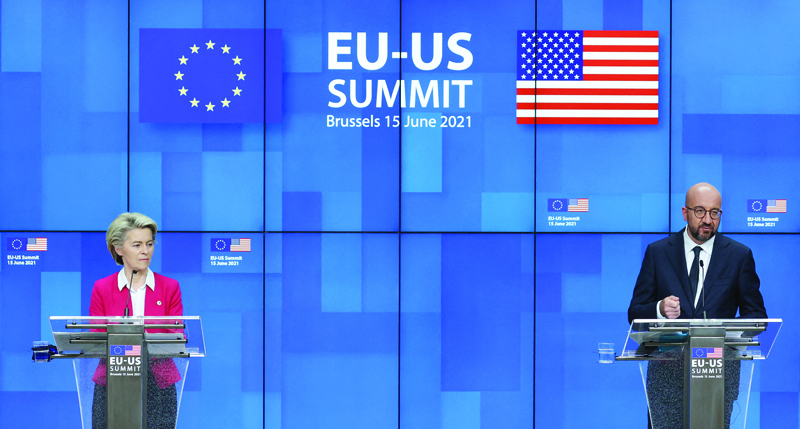 BRUSSELS: US President Joe Biden and the EU agreed a long-term truce in the 17-year-old Airbus-Boeing dispute yesterday, as they try to push past their own disputes and turn their focus to a rising China. BRUSSELS: President of the EU Commission Ursula von der Leyen (left) and European Council President Charles Michel give a press conference after an EU – US summit at the European Union headquarters in Brussels yesterday. – AFP

Negotiated in marathon talks by EU and US officials, the truce was formalized in Biden’s summit with European leaders Charles Michel and Ursula von der Leyen, who hosted him in Brussels. Von der Leyen said the summit had “delivered” as she hailed a “breakthrough” in the long-running feud. “This really opens a new chapter in our relationship because we move from litigation to cooperation on aircraft,” she added.

Earlier this year Biden and Von der Leyen-the president of the European Commission-had suspended retaliatory tariffs in the dispute over subsidies for the rival planemakers. The punitive measures targeted European cheese and wine and American what and tobacco, among other products. The EU said the truce was set for five years, leaving enough time to resolve the fight-while still factoring in China’s growing capability in the aviation industry.

“Instead of fighting with one of our closest allies, we are finally coming together against a common threat,” said US Trade Representative Katherine Tai, who also attended the meeting. “This is a model that we will use to build on for other challenges posed by China and non-market economic competition,” she added. Biden’s two-hour stopover at EU headquarters, tucked between a NATO summit and his sitdown with Russian President Vladimir Putin in Geneva, is supposed to mark a clear break with the tumultuous four years with Donald Trump as president.

‘Sweating’ for deal
Airbus welcomed a deal that it said would “provide the basis to create a level-playing field which we have advocated for since the start of this dispute”. Germany’s Economy Minister Peter Altmeier said the accord was “a great relief” while his French counterpart Bruno Le Maire urged for a “permanent” end to the conflict. It will also avoid lose-lose tariffs that are only adding to the many challenges that our industry faces.” The Europeans are trying to clear the slate of trade disputes to consolidate a more friendly phase and jointly tackle other issues, which also include curbing big tech and handling Russia.

A European official said both sides had been “sweating” to find common ground ahead of the meeting and give a clear sign that Trump-era battles will soon be behind them. But another, as yet unsolved, row is a tariff of 25 percent on steel and 10 percent on aluminium that Trump slapped on Europe and other close partners in 2018. Brussels hit back with counter-tariffs on 2.8 billion euros worth of iconic US products, including bourbon whiskey, jeans, and Harley-Davidson motorbikes.

Von der Leyen said the “first priority” was put on the aircraft dispute and that Washington knew that a solution was needed on steel by the end of the year when Europe could inflict fresh sanctions. Trump and Brussels also quarrelled over taxing big tech platforms after France led a group of EU states by hitting Google, Facebook and others with a special levy. Washington fought back with a wave of counter-tariffs that Biden has frozen, as both sides await a worldwide deal on how to better tax big tech companies.

‘Maximum pressure’
Biden and the EU chiefs agreed to cooperate in something called a Trade and Technology Council that will attempt to write joint rules for artificial intelligence and other innovations over the coming years. The senior US administration official described the council as an important initiative that would serve as a platform for cooperation for years ahead. “The notion here is that the United States and Europe laid the foundation for the world economy after World War II and now have to work together to write the rules of the road for the next generation,” a senior US administration official said.

Though unnamed, China is the important backdrop for the council, which will set rules for “technologies based on our shared democratic values, including respect for human rights”, the draft communique says. Brussels and Washington also set up a joint forum on Russia to exchange ideas on facing increasingly disruptive moves by Moscow, with a special focus on fighting disinformation and other flagrant misuses of technology. The model is based on an existing forum on China that meets to find ways to more closely align the EU-US stance towards Beijing’s growing global influence. – AFP