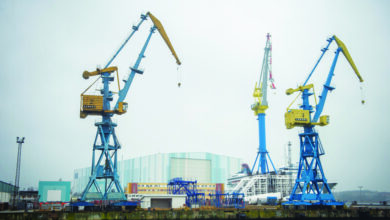 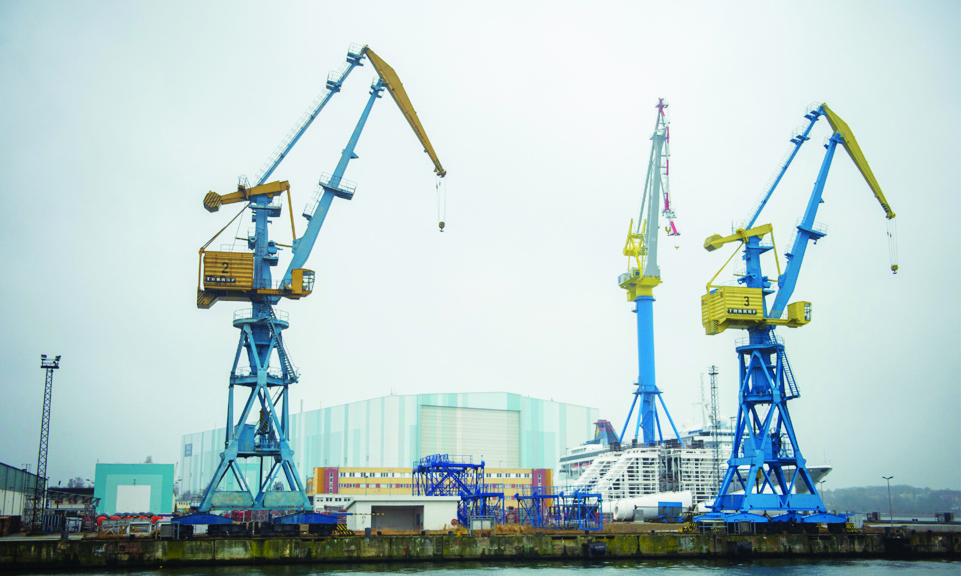 WISMAR: The main assembly hall of the shipbuilder MV Werften is pictured in Wismar. Submarine and ship builder Thyssenkrupp Marine Systems said it was buying the Asian-owned MV Werften shipyard on Germany's Baltic coast which had filed for bankruptcy at the start of the year. - AFP.

Inflation sat at 7.6 percent in June, according to the federal statistics office Destatis, still well above the two-percent target set by central banks but down from 7.9 percent in May. Consumer prices in Germany have been on an almost constant climb for 18 months, with the last fall in the rate registered in January this year.

Inflation was first stoked by the disruptions arising from the coronavirus pandemic, and then by the war in Ukraine. Russia’s invasion had caused “prices for energy to climb markedly”, leading to high rates of inflation, Destatis said. Year-on-year energy costs were up 38 percent in June, according to the statistics body, while prices for food also increased by 12.7 percent in the same timeframe. The disruption caused to supply chains by the war and the pandemic also added to price pressures, it said.

The upwards momentum was only broken by government moves to ease the pressure on consumers, including a discounted fuel tax and a flat-rate ticket for public transport. The full impact of these measures could “not be assessed” in the preliminary data, Destatis said. “This is not yet the end of surging inflation rates,” said Carsten Brzeski, head of macro at the ING bank. Rather, it was an example that it is “currently governments, not central banks, that can stop inflation”, he said. Despite the relief for consumers from the government on the costs of transport and energy, “food price inflation continued to pick up” while prices were also marked up for services, Brzeski said.

Looking ahead, the government’s measures are set to expire at the end of August, while “the potential end to Russian gas for Germany is also likely to increase energy prices going into the winter season”, he said. Spanish inflation reached double digits in June, coming in at 10.2 percent, according to figures published earlier Wednesday. The data suggested “eurozone inflation is moving up and not down like German inflation”, adding to the pressure on the European Central Bank, Brzeski said.

Meanwhile, Germany will reinstate its so-called debt brake in 2023 after suspending it for three years to cope with the impact of the coronavirus pandemic, sources in the finance ministry said Wednesday. The government will borrow 17.2 billion euros ($18.1 million) next year, adhering to the rule enshrined in the constitution that normally limits Germany’s public deficit to 0.35 percent of overall annual economic output, despite new spending as a result of Russia’s war in Ukraine, the sources said.

The new borrowing set out in a draft budget to be presented to the cabinet on Friday is almost 10 billion euros higher than a previous figure for 2023 announced in April. However, “despite a considerable increase in costs, the debt brake will be respected,” one of the sources said. After taking on almost 140 billion euros of new debt in 2022, Germany will next year benefit from the end of many expenses related to the coronavirus pandemic, as well as higher tax revenues, the sources added.

Although Germany is traditionally a frugal nation, the government broke its own debt rules at the start of the coronavirus pandemic and unleashed vast financial aid to steer the economy through the crisis. The government has this year unveiled a multi-billion-euro support package to help companies in Europe’s biggest economy weather the fallout from the Ukraine war and sanctions against Russia. Berlin has also spent billions to diversify its energy supply to reduce its dependence on Russia, as well as investing heavily in plans to tackle climate change and push digital technology.

The pledge to return to the debt brake from 2023 was a key point in the coalition agreement signed by the Social Democrats (SPD), the Greens and the liberal FDP as they formed a government in late 2021. The policy was a key demand of the FDP’s Christian Lindner, now finance minister. But pressure has mounted in recent weeks for the rule to be suspended for longer-even from within the coalition government. “We need to discuss the debt brake,” SPD co-president Saskia Esken said last week, calling for the rule to be waived into 2023.

“In times of crisis, austerity is the wrong instrument,” said the Green party’s Sven-Christian Kindler, who sits on the Bundestag’s budget committee. However, Lindner insisted this week in an interview with the ZDF broadcaster that “the return to the debt brake is not negotiable”. The minister pointed to rising interest rates in Europe, which is expected to cost Germany an extra 12 billion euros in 2023. Discussions on the draft budget in parliament, which are due to begin in September, are set to be heated. – AFP.