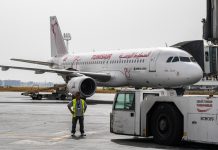 TUNIS: Tunisia’s transport minister yesterday fired the CEO of Tunisair, just over a month after naming her to revive the ailing national carrier’s fortunes. Olfa Hamdi, an engineer educated in France and the US with experience in managing major enterprises, was dismissed because she failed “in her duty to act discreetly” and did not coordinate with the ministry, Transport Minister Moez Chakchouk said.

Hamdi had clashed with the powerful UGTT union, publishing details of union dues on Facebook. The state-owned airline is heavily indebted and subsidized by the public purse. It employs around 7,800 staff, for a fleet of less than 30 planes, of which only a maximum of eight are currently operational, according to the ministry.

Tunisair’s accounts were frozen earlier this month at the behest of Turkish operator TAV, a creditor of the airline which operates airports in the North African country. Hamdi recently launched in the US an organization called the Center for Strategic Studies on Tunisia, with backing from an American lobbying firm, according to a site that investigates lobbying influence. The revelation triggered criticism of the Tunisair CEO. – AFP