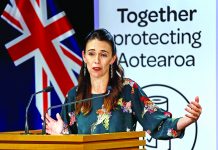 “I can confirm that quarantine-free travel will begin in just under two weeks, at 11:59pm on April 18,” Ardern announced after the date was confirmed by her cabinet.

The travel bubble comes more than a year after New Zealand closed its doors in the face of the coronavirus pandemic and six months after Australia allowed Kiwis to fly into selected states without the need to quarantine. Ardern described it as a world leading move between New Zealand, with just 26 COVID-19 deaths in a population of five million, and Australia with fewer than 1,000 deaths in a population of 25 million.

“I cannot see or point to any countries in the world that are maintaining a strategy of keeping their countries COVID-free whilst opening up international travel between each other,” she said. “That means in a way we are world leading.” “I very much appreciate the arrangement the New Zealand government has come to today,” Australia Prime Minister Scott Morrison told a press conference. “We welcome them back as indeed Kiwis will be welcoming Aussies.”

Last week, the tiny Pacific island nation of Palau, one of the few countries never to have had a Covid-19 case, opened a travel bubble with virus-free Taiwan, which President Surangel Whipps described as a “ray of light” showing the world was slowly emerging from the pandemic. However, just hours before Ardern’s announcement, British Prime Minister Boris Johnson said it would be at least another month before he could allow holidays abroad.

New Zealand’s beleaguered tourism industry said the long-awaited bubble could inject up to a billion NZ dollars ($705 million) into the economy this year. The South Pacific nation is a popular holiday destination and its COVID-crippled tourism industry has been pressing for months to have quarantine-free travel for Australians, who make up about 40 percent of international visitors. “It could be up to NZ$1.0 billion and maybe even more that flows into our economy for the rest of this calendar year,” the head of Tourism New Zealand, Rene de Monchy, told Radio New Zealand.

‘Bring your family’
Ardern urged Australians to take advantage of the bubble, with New Zealand’s ski season on the horizon. “We are a safe place to bring your family to come and visit,” she said during a press conference. Air New Zealand immediately announced it was ramping up flights to Australia from the current four a week to more than 20 when the bubble takes effect.

However, Virgin Australia said while the travel bubble was a step in the right direction it would only be offering a limited schedule for flights to the ski resort town of Queenstown over the next five months. One of the hurdles in setting up the two-way corridor has been sporadic outbreaks of community transmission in both countries, with Australia repeatedly suspending quarantine-free travel from New Zealand due to virus outbreaks in Auckland.

The flare-ups have been successfully contained with snap lockdowns and Ardern said travellers needed to be aware that further outbreaks in either country could impact on travel plans. “People will need to plan for the possibility of having travel disrupted,” she said. “Just as we had alert-level settings for managing cases in New Zealand, we will have a framework for managing an outbreak in Australia,” she said. “In many ways we will treat Australia as a region of our own when we’re making decisions on restrictions.” – AFP