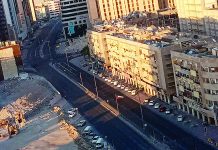 KUWAIT: As Kuwait entered the first day of a 5 pm to 5 am partial lockdown yesterday, the country was in total paralysis with unprecedented traffic jams that continued way after the deadline. KUWAIT: Fahd Al-Salem St in Kuwait City is deserted yesterday as a nationwide curfew from 5 pm until 5 am is imposed for a month. — Photo by Yasser Al-Zayyat

Motorists posted hundreds of pictures showing thousands of vehicles motionless on most of Kuwait’s main roads as people raced against time to beat the deadline.

“Nothing new…another government failure,” commented MP Osama Al-Shaheen on Twitter. “I said before…the biggest crisis facing Kuwait today is the continuity of the prime minister at the helm. He has failed to manage the crisis,” said MP Abdulkarim Al-Kandari.

The government last week decided to re-impose a partial nightly curfew for 12 hours after a spike in the number of coronavirus cases. Kuwait yesterday reported 1,144 COVID-19 cases and seven deaths. Health Minister Sheikh Basel Al-Sabah, who recommended the new curfew, was strongly criticized by MPs, who accused him of failing to manage the pandemic.

Opposition MPs yesterday vowed to file two grillings against the health minister for his mismanagement of the coronavirus crisis. A large number of MPs immediately backed the grillings. Two lawsuits were filed yesterday against the government challenging the legality of the fresh curfew, saying closures have devastated the economy and the lives of people. The Municipality said yesterday that markets will remain open from 5 am and close at 4 pm daily, an hour before the curfew.

Meanwhile, the government and the National Assembly are on the verge of yet another showdown after two leading members of the opposition yesterday said they will file to grill HH the Prime Minister Sheikh Sabah Al-Khaled Al-Sabah after the government referred an opposition-sponsored gathering to court.

MPs Mohammad Al-Mutair and Bader Al-Dahoum said that the interior ministry had referred the attendees to court even after they agreed to a request by Interior Minister Sheikh Thamer Al-Sabah to replace the gathering with a press conference.

Dahoum said the opposition had planned to organize a large gathering in which thousands would have attended, but agreed to replace it with a press conference after a meeting with the interior minister. Mutair said the interior minister was pleased with the change and had said he was a messenger of the prime minister, adding that this reflected a selective application of the law, claiming the government had closed its eyes on many gatherings organized by others.

The two lawmakers held the prime minister responsible for sending the opposition to court. Dahoum said under 300 people attended the press conference, and charged that half of them were state informers. A number of opposition lawmakers immediately announced their support of the grilling.