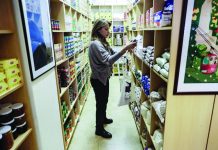 BEIRUT: To feed her family, Lebanese mother Sandra Al-Tawil sold her fridge and washing machine. Now she fears the cash-strapped state will scrap food subsidies, plunging them deeper into poverty. Lebanon is locked in its worst economic crisis since the 1975-1990 civil war, with no end in sight. The value of the Lebanese pound has plunged, driving up the price of crucial imports like food and fuel and triggering small but angry protests. BEIRUT: Maya Ibrahimshah, the founder and president of the Lebanese NGO Beit al-Braka (house of blessings) organizes the stock of food to be distributed to the needy at the organization’s headquarters on Feb 23, 2021. – AFP

More than half of Lebanon’s population is poverty stricken and relies on subsidies, but a central bank demand for “an immediate plan to ration subsidies” is looming. “We’re already tightening our belts. What will we eat if we can no longer buy rice or lentils?” 40-year-old Tawil said. Tawil and her husband lived a comfortable life in Dubai before returning to their homeland to open a high-end hair salon in 2019.

But that dream turned to nightmare after the financial crisis and the COVID-19 pandemic hit. “I had to sell my washing machine and fridge… just to get the minimum of daily bread and pay rent,” said the mother of two young children. Her husband found a job at the start of the year, and the Beit El Baraka charity is helping them out with food and school fees. But Tawil is still worried, and furious with the political class she blames for the malaise. “If I see people heading out to protest, I’ll be the first to join them,” she said.

Money running out
In a country that imports 80 percent of its food, much of the six million population depends on subsidies to get by. Even without them being lifted, many are already struggling, said Beit El Baraka founder Maya Ibrahimchah. “There have been many more demands for help over the past four months,” she said. “Those we are helping today are all from the middle class.”

The state has poured up to $437 million into subsidies a month, the World Bank estimates, to keep prices in check for bread, medicine, fuel and electricity, as well as around 300 other items since mid-2020. To counter the pound’s drastic devaluation, importers get access to dollars at a preferential rate to ensure they can afford to continue bringing in supplies.

For flour, fuel and medicine, for example, they offer dollars at the official exchange rate of 1,507 pounds to cover most of their cost. But traders must resort to the black market to cover the difference, where Tuesday the rate hit a record low of 10,000 pounds to the dollar. As a result, in less than a year the price of a large bag of subsidized bread has risen from 1,500 to 2,500 pounds.

Authorities have remained vague about how the subsidies will be reduced, though meetings are ongoing. In early December, central bank governor Riad Salameh said it could only fund subsidies for another two months. Later that month, he said two billion dollars were available for them. At the end of February, the central bank’s website showed it had $17.9 billion in foreign currency reserves, yet $17.5 billion of that is the bank’s required reserves. The bank did not respond to AFP’s repeated requests for comment.

The UN food agency has warned any subsidy reduction would have “major inflationary repercussions” and “put an unbearable strain on households”. The price of bread could increase by up to three times and fuel by 4.5 times, the World Food Program said, adding it was critical to immediately scale up assistance to the poorest.

‘Catastrophic’
Under the government’s latest plan, subsidies could be gradually lifted, with financial aid to soften the blow over several years. The state would first lift subsidies for bread, fuel and around 300 other items, under the plan seen by AFP, before later on reviewing spending in the electricity sector. To compensate, up to 80 percent of the population would receive handouts – $50 a month for adults aged over 23 and half for anybody younger.

Those amounts, and the numbers of beneficiaries, would then progressively diminish. Until then, the authorities have secured $246 million from the World Bank to help 786,000 Lebanese. But Nasser Jomaa, 52, said he doubted the government would really provide any financial support. “It’s just empty words. We have zero faith in the state,” said the driver, who lives with his unemployed 25-year-old son. As the Lebanese pound has plunged on the black market, he has seen his monthly income drop in value from $1,000 to just $160. He added that any lifting of subsidies would be “catastrophic”. Already, he said, “we no longer eat meat.” – AFP