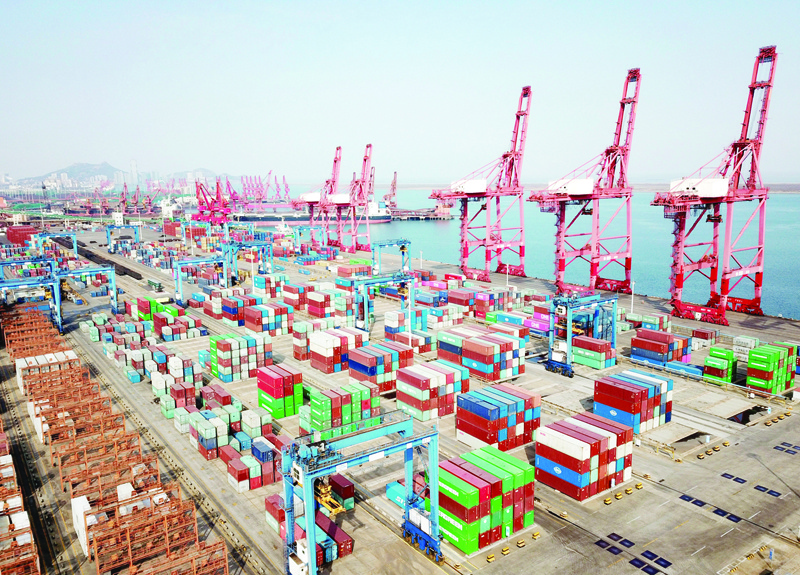 China exports spike to highest in decades after COVID-19 hit

BEIJING: China’s export growth jumped to the highest in over two decades, official data showed yesterday, with imports also surging in a sharp bounceback from the coronavirus outbreak that had brought activity to a near halt. This aerial photo shows shipping containers for export stacked at a port in Lianyungang, in China’s eastern Jiangsu province on March 7, 2021, as the country’s export growth jumped to the highest in over two decades according to official data shown on March 7. STR / AFP

Electronics and textile exports such as masks contributed to the spike in outbound shipments, as demand for work-from-home supplies and protective gear against the virus outbreak soared during the pandemic. Exports spiked 60.6 percent on-year in the January-February period, well above analysts’ expectations, while imports rose 22.2 percent, official data showed yesterday.

The latest figures stand in stark contrast to last year’s fall of around 17 percent in exports and 4 percent drop in imports. The country struggled to contain the spread of COVID-19 early on, with consumers staying home and businesses seeing a slow return to operations. The customs administration said comparison to last year is also likely to have bolstered the latest figures, saying in a statement that the “low base is one of the reasons for the larger increase this year.”

Chinese authorities started combining January and February trade data last year, while it battled the coronavirus outbreak. This is in line with how some other indicators are released, to smooth over distortions from the Lunar New Year holiday, which can fall in either month.

Off-season
China’s foreign trade data remained strong despite the “off-season”, the customs authority said yesterday. Trade was also high due to a recovery in production and consumption in major economies such as Europe and the United States amid the coronavirus pandemic, as well as improvements in domestic consumption.

Although business activity usually falls during the Lunar New Year period when workers return to their hometowns, official appeals to avoid travelling this year to keep the COVID-19 outbreak in check supported production, the customs administration added. “Many enterprises in major foreign trade provinces such as Guangdong and Zhejiang maintained production during the Lunar New Year,” it said. “Market demand is expected to rebound further.”

Some companies have also been stocking up on goods such as integrated circuits, iron ore and crude oil imports. “Global electronics demand has risen strongly due to the global shift to remote working and online shopping,” said Rajiv Biswas, Asia-Pacific chief economist for IHS Markit.

This had driven demand for electronics products such as laptops, mobile phones and wearables, he said. Meanwhile, the strong import growth also reflected a “normalization of consumer spending” in China, he told AFP, after a severe slump due to lockdowns. Analysts have warned the demand boom for protective equipment supporting Chinese exports could fade as pandemic controls improve globally, although this may not happen too soon.

“The pandemic might have already changed people’s behavior… I think this kind of demand will still be in place for some time,” said ANZ Research senior China economist Betty Wang. But Chinese authorities cautioned yesterday that, given global uncertainties, there is “a long way to go towards steady growth in foreign trade”. – AFP